The new 2022 Volkswagen models are on their ways to dealerships near you. But did you ever wonder how the video footage of those new cars makes its way to the commercials on your TV? VW South Florida was on streets near you in mid-November filming all over South Florida, from Miami to West Palm Beach!

It takes a lot more time, people and effort than you might think to get those beautiful VW models from the roads to your video screens. If you live or work near any of our location shoots, you might have noticed some road closures or a little extra traffic. We’re sorry; we tried to be quick! Did you know, getting footage of our vehicles driving around town requires permits, road closures and a pretty large police presence? Scouts explored locations for weeks before deciding on final spots and pulling permits. Certain city ordinances only allow filming during certain times of the day. Scheduling everything and everyone was like putting together a jigsaw puzzle.

This year, there are so many new Volkswagen products for 2022, it took us two full days of shooting to get everything. Each day started at 5am, with a crew of more than 40 people involved, from car detailers to directors. That doesn’t even include help from the local police departments. We even hired professional drivers. There was a trailer for the crew, tents set up with snacks and plenty of coffee to go around. We also performed a well choreographed rain dance - or, more like a ‘no-rain’ dance. But this is South Florida - it didn’t help.

Brand new 2022 Volkswagen vehicles arrived on a huge trailer truck and were meticulously cleaned. Video was shot with a Russian Arm. Never heard of it? A Russian Arm is a “remotely operated gyro stabilized camera crane system” mounted to the top of a specially designed “chase car” loaded with monitors and batteries and top-of-the-line shock absorbers. If you were lucky enough to witness the Russian Arm in action, you might have been impressed by the matte black high-end SUV with an enormous swinging camera mounted to its roof. You might have also noticed a big black van following closely behind. That’s, unsurprisingly, called a “follow van”. MJS Advertising and Volkswagen teams followed the camera in this tech-outfitted van, enabling us all to watch a live feed of what was being shot and make adjustments as needed. 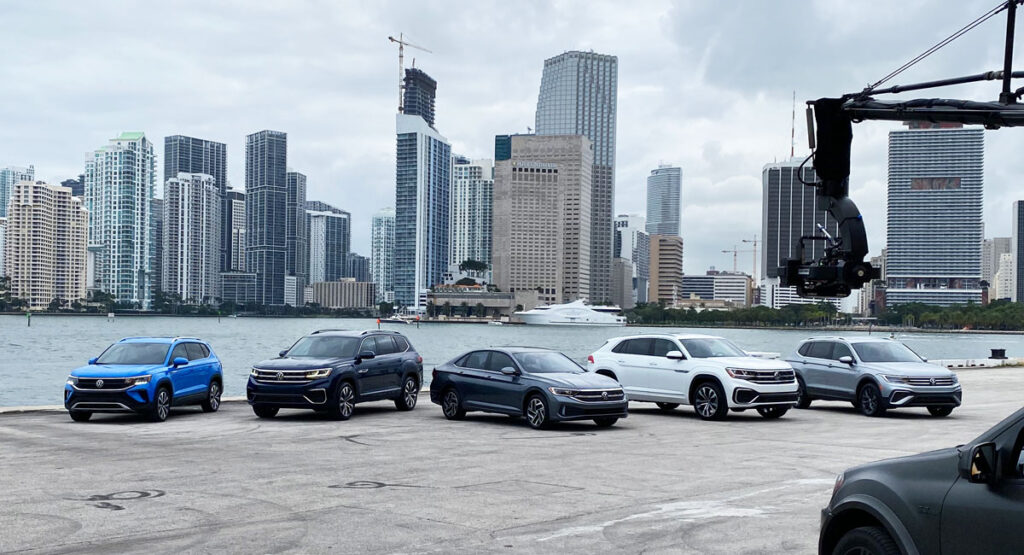 So keep your eyes peeled for new local footage (and ears opened for that familiar whistle) to see if you recognize your neighborhood. You might notice Flagler Drive in West Palm Beach, A1A on Fort Lauderdale beach, the Port of Miami or MacArthur Causeway. But, more importantly, you should notice the new 2022 Volkswagen line-up, including the new Atlas, Atlas Cross Sport, Tiguan, Taos, Jetta and all-electric ID.4. Admittedly, even our beautiful footage doesn’t do these vehicles justice and we didn’t have time to show off the beautiful, roomy, technology-filled, user-friendly interiors. If you want to check them out in person, make sure you visit a dealership near you to take a test drive! You can even reserve an all-electric ID.4.